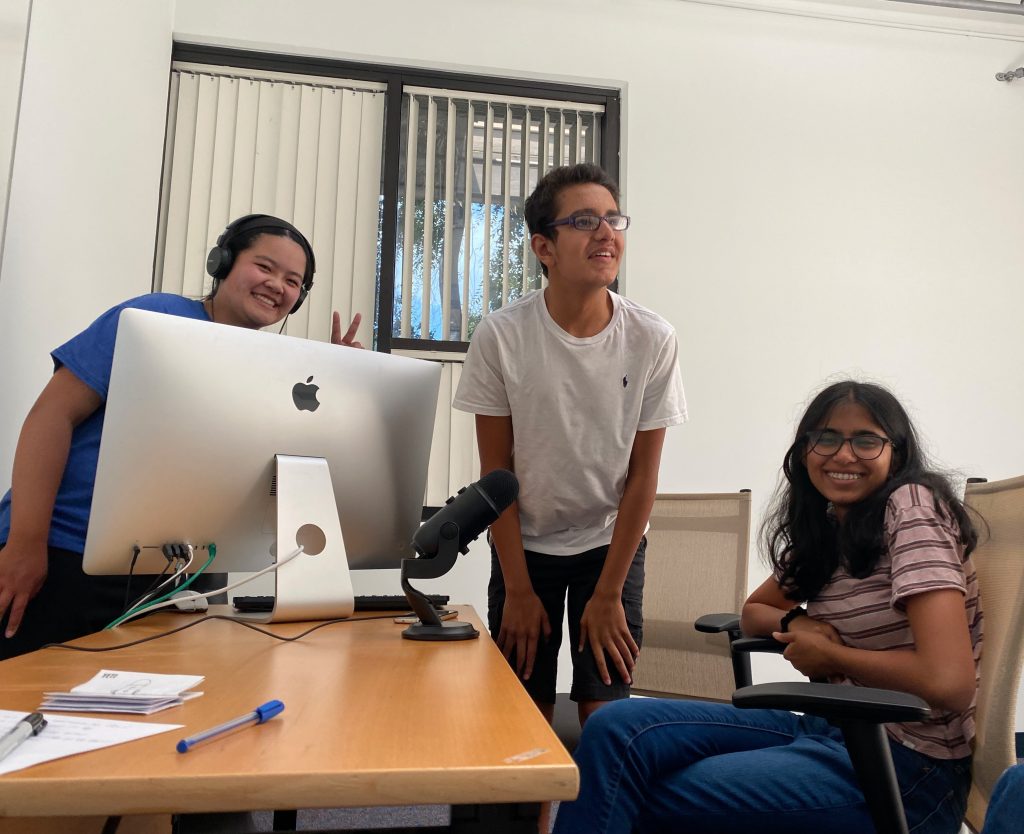 Left: Megan Murakami, one of our interns.

We are pleased to introduce the Midpen Media 2021 Summer Camp interns! We recruited four interns to support this year’s camps: Judge Cantrell, Kiran Costa, Devon Mahaffey, and Megan Murakami. Our Marketing Intern, Evan Warren, spoke with them to ask about their experience interning with Midpen Media Center.

Kiran explained, “I’ve been working with MC Sports for seven years. I’ve been an intern for four years now.” This year, Kiran, alongside Judge, Devon, and Megan, worked with us on our Sports Broadcasting Camp, where students learned to film and produce sports-related content using our production truck. After the camp’s completion, students had the opportunity to join MC Sports just like Kiran did.

In fact, Devon told us that Kiran was the reason he joined our team. “My classmate and fellow sports intern, Kiran, invited me to come to an MA basketball game and cover the game with him.” The pipeline from being a one-time helper to a regular volunteer is quick-working at Midpen Media Center. “Since then, I have continued attending sports games to film with the crew and do occasional sports sit-down shows in the studio.” This year was his third time volunteering at our Sports Broadcasting Camp and his fifth time seeing it in action. Devon followed up with his reasons for continuing to work with us for so long: “I get to be around people who share a love of broadcasting and sports. The Midpen Media Center is a place [where] I can come to make friends, learn valuable skills, and work within my community while doing what I love. Sharing my knowledge of sports broadcasting is also super important to me, knowing that this summer’s campers are the future of the sports program here.”

Megan had a similar story to tell. “I joined the crew for sports games a few years ago. Since then, I’ve helped cover so many sports games [such as] basketball, baseball, [and] football.” She also interned for our Journalism and Studio Production camps in the following weeks. She continued, “I love interning at Midpen because it’s a fun, welcoming environment. I also enjoy working with others, which I get to do a lot here.”

Midpen Media Center offers its interns a unique opportunity to engage with the community while learning the inner workings of a media production organization. Interns get to know our hard-working crew, creators, and volunteers throughout different stages of the production process. Meanwhile, the mentorship received from staff in the organization can lead our interns to a career in media production— possibly even with us! Want to seize this opportunity? We’ve opened up an interest form for local youth to intern with us. The form closes on September 22, so act fast!