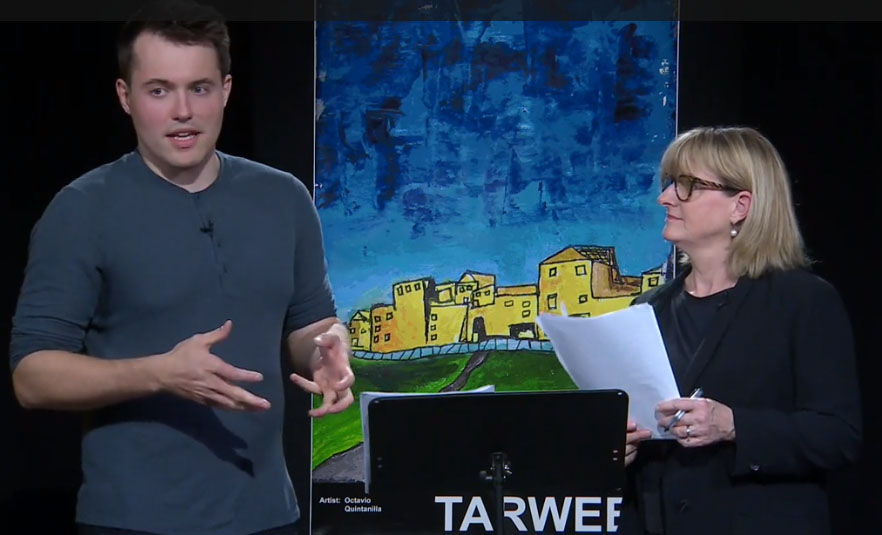 Writing is usually a solitary activity – writers come up with ideas or are struck by inspiration, then work by themselves to get it all down on paper or in a Word Doc. But what happens next? How can writers get what they have written in front of the right audience of readers? “Tarweed Works In Progress,” a new Midpen Media produced show, matches authors with a studio audience and viewers at home.

Tarweed, an online community for writers working on book-length projects, helps authors develop their audience while their writing is still at the work-in-progress stage. Tarweed founder Jean Znidarsic is phasing in several writing support services such as developmental coaching for writers, an online writing sharing platform, and the golden opportunity to read their work in front of an audience. After working with Midpen Media filming on location at other readings, Znidarsic was offered the chance to host Tarweed authors in-studio and to create a professional cable show. “Anything that gives writers more exposure for getting up and reading, I’m all for that,” she says.

At the top of the show, Znidarsic explained that the mission of “Tarweed Works In Progress” is to introduce writers to readers in search of new voices. The show encompassed a wide variety of genres and writing styles. Murder/Mystery, Historical Fiction, and Personal Memoir were some of the types of writing read throughout the show. After each author read for about ten minutes, Znidarsic talked with them about their writing process. “I think it’s interesting to hear how people work and what inspires them,” she says. “I really like it when I have a sense of who the writer is. A lot of times that brings the work alive to me in a way that just having a book doesn’t do.”

When talking about their writing process, many of the writers spoke about feeling their writing still needs work and the lengths to which they go to get their writing done. Author Keiran Brandabar Langer says she has to hike to the top of a mountain to get away from household chores and emails to allow herself to write. Michael Znidarsic says that he writes because he feels panic of losing his ideas if he doesn’t write them down when he’s inspired.

By reading on the show, authors get a quality sample of their work they can use to promote their projects, whether posting it on their writer webpage or sending it to potential publishers. “While you are writing, you should be trying to develop a following and trying to understand who your audience is,” continued Znidarsic. Sometimes publishers leave book promotion up to the author, and if there’s no audience ready to buy the book, that’s a problem.

After the taping, one of the authors spoke with an audience member who said they loved a specific thing the author wrote. It never occurred to her that someone would resonate with that part of the work. Znidarsic says this is what Tarweed is helping authors do – get an excerpt of their work in front of people to see how they respond. Tweaks can be made to the writing before it’s published according to what did or didn’t work. And authors are building their audience of loyal readers along the way.

Find out how you can become a Tarweed patron or author here.