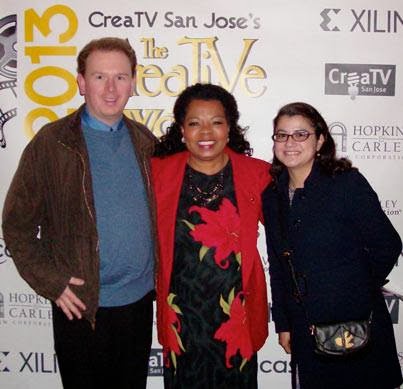 Among our finalists were:

Talking With Henrietta – Dealing with the Last Taboo, produced by Henrietta Burroughs, in the category of “Bay Area Community Access TV Series, Professional”.  This episode explores current thought surrounding dealing with and talking about death in an open and realistic framework.  See a clip from this episode on EPA Today’s youtube channel.

Healthy Eating – PSA produced by the Magic Paint Box with Margaret Rex and Karen Adams, in the Producer category.  The PSA series features a huggable puppet critters with positive messages about food, self-images, bullying and the arts.  The series may be watched on the Magic Paint Box’s website.

As hard as it is for me to believe, our producers were not tapped for the ultimate award, but then I looked at the competition and believe you me, every one of the finalists could have, should have won a top billing.  So keeping that in mind, it’s a huge achievement to be the final five.

Jeff McGinnis, MC staff member, said that everyone “has to up their game” to be in the winner circles there.  The awards ceremony itself was a grand gala on a scale with the city of San Jose so the “quality of the finalists reflected that.”  Jeff had the opportunity to rub elbows with Ed Asner, who was there to receive the coveted Lee Weimers’ Community Media Champion Award.  Thank you Jeff and Lupita for reporting in!  And congratulations to all our finalists.  You have done us proud!