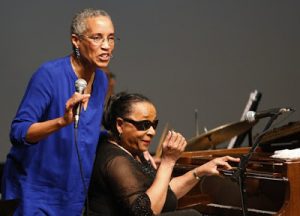 LaDoris Cordell (L) and Valerie Capers (R) photo Courtesy of Josie Lepe
“It suddenly hit me. I am playing all this music of these wonderful White composers, but aren’t there any Black composers?”
— LaDoris Cordell, co-founder of the African American Composer Initiative.–

When LaDoris Hazzard Cordell resumed piano lessons after 36 years of pursuing an accomplished career in the law and mothering her two daughters, she could not have predicted that she would become one of the founders of a life-changing, world-changing musical movement and organization. Her only thought was to get back to music that she dearly loved.

After 4 years of studying the traditional repertoire with the renown pianist Josephine “Jodi” Gandolfi of Menlo Park, LaDoris realized something was missing: her own voice, that of her contemporaries and of her antecedents.

“That’s when the journey started,” LaDoris said in a telephone interview. “[Jodi] was a Fulbright scholar; she went to Germany, she studied at the University of Wisconsin, then at Stanford.  She has done it all, can play anything, but in all of that, there was never any mention of Black composers.  That’s a huge statement about the state of the music establishment and of music education in this country at these major institutions. For years these composers have been ignored. So that started the journey.”

The “journey” morphed into the African American Composer Initiative of which Jodi is one of the co-founders. Since 2009, this group of Bay Area musicians has researched, uncovered and performed the works of Black composers. Dedicated to music making and education, they perform an annual benefit concert for Eastside College Preparatory School in East Palo Alto on the campus in the Performing Arts Center. Benefitting Black and Latino scholarship in a Black and Latino community reflects the core values and mission of the Initiative. Despite pressure from some to move the series to San Francisco or Palo Alto, the performers insist on performing in East Palo Alto, a community “stigmatized by racism.” According to LaDoris, many faithful concert-goers admit that prior to attending their first of the sold-out concerts, they had never been to East Palo Alto, except to speed through as quickly as possible en route to their destination. And they also admit to having their views about East Palo Alto transformed. That’s one of the changes the Initiative is working for.

“We have played the music of more than 25 Black composers,” LaDoris stated with satisfaction, “but more than that, this [has become] a fight for justice.  When I started reading about the lives of some of these composers, who wrote the most fabulous music and died despondent, in despair, because when you’re a composer…the pleasure is having others enjoy your music. Not to write it down and then stick it in a drawer. And they didn’t get that opportunity. [They] trained at Oberlin, at Eastman, at the Conservatory of Music, training at the best places and we’ve never heard of them. I’m just trying to right some wrongs here…that’s my goal.  I just feel for all these creative geniuses because of the racism in the music establishment…if there were no racism in the music establishment, this gorgeous music would have been out there…so it’s part of my fight for a post racist America – it’s an acknowledgement that racism exists and it permeates everything in America. So if you look at music, oh yeah it’s there.”

“So what do we do about that?” LaDoris continued. “Well, what we’re doing about it was to form the Initiative…We keep packing the house and people come in and say ‘I never expected the caliber of music upon that stage,’ and I say, ‘Yeah, of course!  We work hard on this.” [Soon we will be] planning and preparing for next year’s concert…So that’s what this is about for me. I’m passionate about it. Just to sit and play it gives me pleasure.”

What role has the law played in her music? LaDoris is still passionate about the law, and she brings that with her in everything she does. Justice is the reason LaDoris entered the law in the first place. But she didn’t stop there. She served on the Palo Alto City Council.  She accepted appointments to the bench for Northern California and Santa Clara County, breaking gender and racial barriers both times. And even her position as Independent Police Auditor in San Jose was accepted because of her passion for justice and for transparency and accountability in policing.

Furthermore in cooperation with local law enforcement, LaDoris has hosted local TV shows produced here at Midpen and at our sister station in San Jose. “Make the Call” is about profiling the victims of violent crimes and their families, and encouraging those with information to come forward.

After a successful career in law, some folks might have kicked back and enjoyed the “good life,” but LaDoris is very much alive to the importance of leadership and visibility in the Black community. Which turns us right back to why she is promoting the works of Black composers, making sure their sonatas, chamber pieces, symphonies and even operas, are heard, especially by young people of all colors. The concerts regularly include guest performances by students at Eastside.

Referring to her career path and then founding the Initiative, LaDoris said, “These are the things I wanted to do, what I thought I could do, not be a bystander… because I think if you are a bystander then you are part of the problem. Pursuing the law gave me this sense of urgency about justice, bringing about justice as much as we can, in any form we can. It’s the same with the music. That work I did, informs the work I do now. It’s in a different way, but it’s still that same passion.”

When LaDoris spoke about topics like injustice, racism and despair in the African American community, her voice stayed steady, upbeat, positive, lilting, like grace notes. I had heard about her can-do attitude from others and had seen her on TV and even at the gym once or twice, always looking totally together. I asked her how she kept up the amazing attitude.

“I owe a responsibility and an obligation to the many, many people who came before me, but more specifically in my own family. My great grandmother and great-great grandmother were slaves.  My ancestors survived the Middle Passage, came here, survived slavery, survived Jim Crow, got the right to vote. For me to sit around and say “I can’t do anything” is an insult to them, to my family and to everyone…everyone who was out their protesting and marching, to do what they needed to do to get us to the point where this little Black girl from Ardmore, Pennsylvania could be a judge. I mean really? To not continue to fight is to do an injustice.”

A conversation with a visionary, a trailblazer and a fearless embodiment of “Justice” is not something I do every day. I knew I would take a walk after finishing up our conversation. But I liked her reference to herself as a child. She had mentioned her family growing up, how they were all musical.  It was a way of life for them.  I just had to ask LaDoris if she practiced everyday. “Oh absolutely. On a good day, two hours.  On a bad day, one. When I was little I didn’t like to practice, now I love to practice and of course, I still take lessons from Jodi.”

The 8th annual concert of the African American Composer Initiative featured the music of Valerie Capers and was held on January 30 and 31st. A DVD of the concert is in production and will play on Midpen’s channels later this year. The 9th concert is scheduled for January 28 and 29, 2017. Mark your calendars!

The initiative also just released their first of what they plan to be many CDs. This CD features the piano pieces of Black composer Zenobia Powell Perry.

The African American Composers concert series is available to watch this weekend on Comcast Channel 30 and is available to stream on our website in honor of Black History Month. The following will be showing: