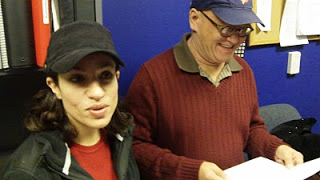 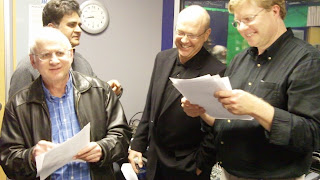 MC Volunteer Scott Van Duyne produced the first PRACTICE SHOW, the show where crew practice and rotate through crew positions they want to learn. The plan which we executed was to perform 3 9-minute shows. The set up was simple. Tech Nancy Brown suggested a no fuss approach to lighting, so we set the host and guest chairs up basically where they had been for the prior show, so the spots were already lit. That got us going fast.

There was about an hour of mentoring where studio pros helped out people wanting to improve their skills. Bill worked with Patricia on graphics. She reported that it really helped to do 3 shows. By the third show she was really getting it.

I worked with the hosts going over possible scenarios and questions for the guest.

Audio pros like Scott and Steve worked to teach microphone set up for a two person show with singing microphone and guitar microphone.

Executive Director Annie , volunteer Stan, Tech Nancy and volunteer David all gave me pointers on camera which I hadn’t run in over a year. I learned I had forgotten a lot! I know what not to do, and what to do, but I think I need more practice! My fast zoom on Show 2 made everyone seasick in the control room, and my soft focus on Camera 3 during Show 3 showed me where I need to “focus.”

The guest in the studio was Victoria Van Duyne who performed some original songs and was interviewed. Crewbies (New crew) Brian, Anis and Marty set up her microphones, did sound checks and ran the audio board. The show hosts were Eiko for show 1, Andrey for show 2 and Stan for show 3. Making their directorial debut last night were Stan, Leena and Kamla. Exec. Dir. Annie ran camera for the first two shows to keep her camera-tone. And I was really glad to see Floor Director getting some respect. I really think that FD is undervalued sometimes and we had standalone floor directors who learned fast that you have to get into the line of sight of the host and not expect the host to come looking for you! FDs were Anis, David and Bill. Great job guys!

I could go on and on. It was for the most part super-fun. It was relaxed with the emphasis on trial and error and learning. Scott would like to run these monthly but is looking for producers to step and plan the guests. He plans to to track who attends and does what position. So he’ll keep the list and track progress.

I plan to keep coming until my camera skills are great. Then I can’t do that job any more on the Practice Show and I’ll have to try something else.

You can watch the practice show starting Thursday January 14 at 7 pm on Channel 30. Click here for show times