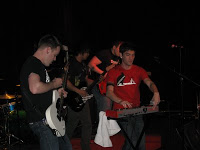 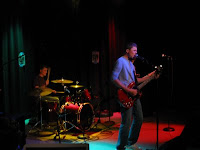 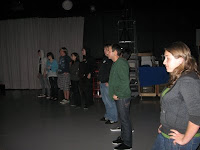 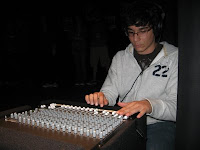 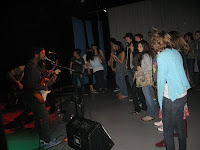 On Saturday, March 28, 2008, the Media Center Studios welcomed back THE SOUND, a night for bands and students produced by Danielle Fairbairn, the Media Center’s Youth Services Coordinator. The opening band was Corner Street Light featuring the music of two PALY students who happen to be brothers, Charlie and Freddie Avis. (www.cornerstreetlight.com). They gave us a great show despite the fact they were missing band members due to the holiday weekend. Sai of the band Middlefield subbed in as bass. Freddie is a convincing vocalist and their original songs stand up to anything you hear on the radio. The second band Your New Secret gave us an excellent show. I caught up with them after their set and learned they are all experienced musicians and have already been on tour. That explains why their sound was super tight and clean with great original songs delivered with impact by principal vox Mike. (www.myspace.com/yournewsecret). Now Middlefield is a great band with a promising future. Sai the lead guitar and main vox is quite an exceptional musician. And their original songs and arrangements are really ambitious and interesting to listen to (www.myspace.com/middlefield). The band is made up of local high school students including students from PALY and Gunn. We were really lucky to have so much talent in the house!

One of the features of THE SOUND is that at the end of the evening there was voting by the studio audience. The winning band will be competing against winners of future “THE SOUNDS” and then during the battle of the bands produced at THE SOUND, the winning band will be featured on AMERICAN SONGWRITER, a TV show featuring emerging bands, produced here at the Media Center by Scott Van Duyne and me. The winning band for this past Saturday was…(DRUMROLL)… Your New Secret. And this takes nothing away from the other bands. The more you play and stay together, the better you get! And Your New Secret was a more mature band with a consistently excellent performance.

On a side note, the sound board for the night was run by Youth Advisory Council member Eduordo De Armas, a high school sophomore who evinced an interest in learning audio. Eduordo is the first student trainee using the Media Center’s new studio audio system.

For more information about THE SOUND or the Youth Advisory Council and other opportunities for youth at the Media Center please contact Danielle@midpenmedia.org. For questions about this blog, contact me, Becky@midpenmedia.org. For questions about training and classes we offer to hone your studio production skills, check out our website first and then telephone 650-494-8484 and speak to Dave to sign up.