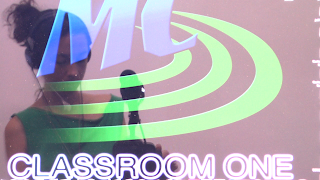 Vivid news, intense documentaries, discussions about recent events or fiction videos exposing an individual view on a relevant concern: The Midpen Media Center keeps all of you guys up with everything that recently matters in Atherton, East Palo Alto, Menlo Park, Palo Alto and Stanford. A television station that is closely connected to its community members as opposed to the usual rather unconcerned and passive TV consumption. Here every one of you can even become a producer yourself in the name of the Bay Area. The MC is a true local facility, one could say.

THEN WHAT THE HECK AM I DOING HERE ?!

I am the Media Center’s latest intern … German intern. From the other side of the world. Time shift: 9 hours ahead. My name is Sarah-Marie (actually Sarah-Maria but as there are far too many syllables, I abolished the a), I am 23 years old and study at the Frankfurt Goethe-University. Even though this here is not in the least my community, I am glowingly delighted about every blink of my eyes that I can spend at the Midpen MC. For sure it is due to the huge variety of things I get to learn. As a student of ‘Theater-, Film- and Media Studies’ and ‘History of Art’ (and ‘Economics’, by the way; a lot, I know, sometimes I think it’s even too much of a lot) moving pictures are a engaging and esteemed field to me, yet in a merely theoretical and philosophical way. So my hands have been tickling for some time to get onto something, on a physical project so to speak. But there is far more to my amazement concerning the life as an intern.

When I accidentally got the opportunity to be accommodated by some people in Palo Alto, foreigners at that time (their openness still leaves me stunned yet feeling like home), I began searching for some volunteer opportunities in the Bay Area. Googling I came across the MC website that instantly raised my curiosity. Still, I never would have dared hoping to learn such ambitious techniques and achieving such skilled training without bringing any foreknowledge with me. So although video production turns out to be a mainly digital process (in relation to my prior used ‘physical’ image), this is exactly what I wanted. I had planned on doing a 20 to 25 hours/week internship but have ended up staying all day at the MC during the last three weeks, mainly spending time with my precious Final Cut Pro (Plug! … ? no, love.). And when I, beyond that, could shoot the footage myself (in HD!), a rather marvelous feeling emerges. What one can conjure with moving images and sound! I supremely appreciate being able to follow just these personal interests and urges, while steadily receiving support – not only by Becca (!!) but by all the other members, volunteers and employees that provide their time and thoughts, and what is more their open-minded interest in letting me take part in their MC life. And here we have the other fact I am so lucky about:

Back in Germany one of my biggest worries was to remain a tourist in the Californian Bay Area, in this faraway place that I however was so eager to get to know. Now I can honestly state that I don’t find myself in a touristy spot at all. Besides the just mentioned steady support this is due to some people I have never even met face-to-face: the MC’s youth. One of the first things I intensely encountered were the works of former MC interns and members of the YAC when editing their 2010 Youth Highlight Reel. It is quite a bond to be formed in the editing process towards the respective footage. Their documentaries, shows, visual essays and fictions offered me versatile and sensitive insights into the Bay Area as well as a slight idea of the young videographers’ mindsets and thoughts. Some touched me personally or left me stunned of the work’s visional beauty.

To be honest, I envy all you volunteers for the opportunity to stay involved in this fun work. But you are a great lot and besides feeling deeply grateful I am just happy that this medium is so vivid that thanks to the internet I will be able to keep in touch and anticipate in your pictures and your minds, even 5500 Miles across the ocean.

If you are interested in my very own first work apart from the Highlight Reel, watch this. I’d like to remark that I am still concerned with aesthetics in the main, perhaps because of the ‘early experience and try-out’-state I am in, perhaps because of my personal art-theoretical background and interest. So guys don’t expect too much content. But … goodness knows, you might find some.

Here I just tried something with Garage Band, but it’s not at all fully worked out. I guess I find the impression and expression of the film better in silence. You might try both.

Concerning audio, I worked with the background noises here.