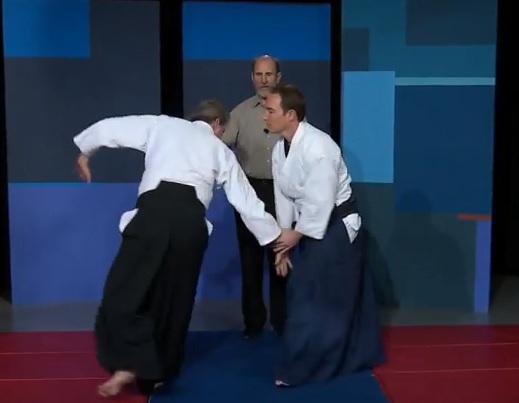 “OK folks, two weeks from now, you’ll be making your own TV show. You need to line up a host, guests, design a set, pick music, create an animated open…oh and by the way, between now and then you’ll need to learn about our studio equipment because you’re going to be the crew for this show.” That’s the message we deliver the first night to every group that signs up for our Comprehensive Television Studio Basics class.
The students think we’re crazy.

But it always turns out to be possible. Our most recent group of nine students exceeded everyone’s expectations— theirs and ours— by taping an outstanding show, Aikido Everyday.

“I’m ecstatic at the outcome of the show,” says student Kristian Crump, the show’s host. But when he initially saw all the buttons in the control room, his first thought was, “How am I going to figure out what everything does?”

In the show, Kristian interviews aikido expert Michael Chojnaki on camera about the uses of aikido in daily life situations: times when someone is belligerent, for example, or times when the boss walks into the office. Michael then demonstrates some of these techniques and teaches them to Mike Roberts and Dority Stevan, aikido novices whom the studio students recruited. In the show’s finale, Kristian was joined by David Jenkins to demonstrate more advanced techniques as the credits rolled.

“When I started the class, I expected our show to be pretty simple,” says student Dan Tunturici, the show director. “I was impressed with what we produced. To come together as a cohesive team in such a short amount of time is impressive.” Dan had taken video classes in college and done some work since. “It’s important to keep flexing those video production muscles,” he says. “I enjoyed the experience—[the class] inspired some new ideas.”
Dan and Kristian were helped by students Bob Boucher, Kenneth Jeon, and Charlotte Zhang, who operated the studio cameras and followed the aikido action around the floor mats. Alma Angel switched, A K Sah was floor director, Ron Marks did audio, and Jessica Yuen did graphics. Jessica is planning to produce a show at Midpen Media in the following months. Alma works for Midpen Media as a camera operator at Redwood City’s city hall. Ron had a head start on audio, having taken our Studio Music Mix class in September.