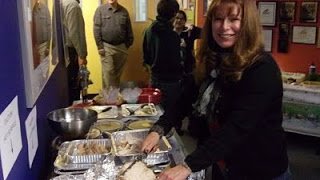 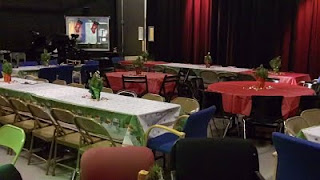 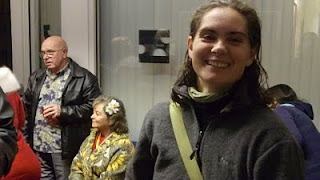 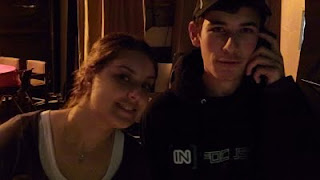 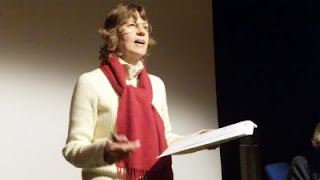 Karen Adams and her elfin crew of staff and volunteers prepared for and decorated the Studio and Studio lobby for our annual Volunteer Appreciation Holiday Party last night. Tuesday night’s elves were Brian Good, Steve Hall, Jim Seawright, Joanne Scott and Erik Baker. They stayed up until all hours setting up the studio for a sit-down dinner for a hundred. On the day of the party, Joanne Scott, Lupita Segura, Leena Elhousseiny, Interns Ola and Wes stepped up to put the finishing touches on the decking of the halls. Cathy Keys expertly carved the turkey and ham for the traditional holiday feast that Karen had arranged for. Warm and welcoming, our facilities sparkled for an evening of magic where we recognized the contributions of volunteers’ time and talents. And when all was over we had an incredible turnout of staff and volunteers to put right the studio. After all the show goes on every night around here.

After everyone was served and seated in the studio, our Executive Director Annie Folger addressed the audience briefly on the very serious issues confronting PEG stations nationwide and the CAP Act being introduced in Congress to save PEG. Please read about the action you can take to help support the Media Center and other PEG stations here. Annie also spoke briefly about some of the exciting new things happening in 2010 around here.

Karen then hosted the rest of the evening. We watched short clips from all the series produced at the Media Center during the past year, including our WAVE award finalists and our WAVE award winners. This reel was produced by Nancy Brown, Becca Fisher and our intern Ola. These clips can be watched on our website. Additionally, we played our annual party game. This year, we competed in a trivia game based on the shows we produced here this year. Studio tech and volunteer, Stan Ng won the trivia game. He’s volunteered for, teched on and done roll-ins for so many of the shows around here, well it’s hardly surprising he’d come in first.

After the game, Karen announced the Studio Stats for the year thus far, carefully compiled for us by Lupita Segura. The Media Center has produced 335 shows thus far this year with 225 volunteers. Karen called out the names of the volunteers who had worked on 10 or more shows. We had fifty such persons! Can you guess who the number 1 volunteer was coming in at 235 shows? I’ll give you a hint: It was the same guy as last year! Yep! Steve Hall! He was followed by Bill Lindemann at 156, Scott Van Duyne at 76, Eric Baker at 68, Marty Wasserman at 57 and there is Stan Ng again, coming in at 55. 8 volunteers worked between 40-50 shows, 12 worked 20-39 show, and two dozen volunteers worked between 10 and 19 shows! If you have a hankering to see the complete list it has been posted on bulletin board outside the gold room.

The gift hours represented by all this time and talent, well it’s enough to restore your faith in the basic goodness of people. Sometime we can lose sight of what’s important when there’s so much misery, hardship and rough times. But we at the Media Center are doing what we can to offset the baddies out there. And because we are a media outlet, we are in a unique position to influence the messaging out there.

Thank you to our volunteers. We couldn’t do much or influence anybody without you. WE LOVE YOU and thank you for another year of unparalleled, selfless service.

And thank you to Karen and the elves for giving us a magical evening of celebration and friendship.