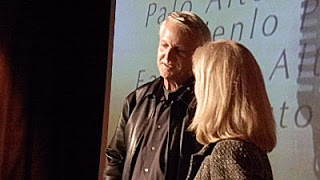 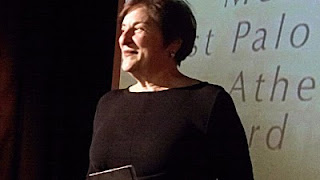 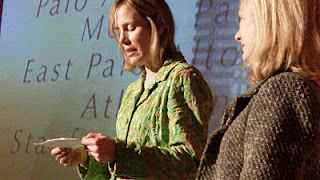 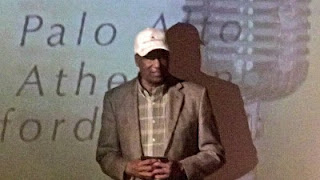 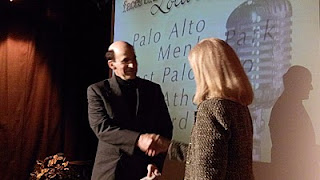 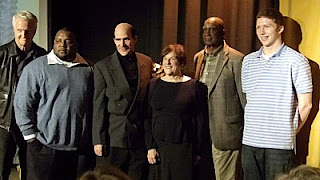 The Media Center launched its fourth annual Local Heroes Series last Sunday with a screening and a reception to honor this year’s recipients. The Local Hero award singles out those individuals in our community whose passion of service creates such passion in others that others nominate them as a Local Hero. Candidates are then investigated and selected by committee. Narrowing the “winners” to six was particularly challenging this year due to the high number and excellent qualities of the nominees. So if your hero wasn’t chosen this year, please re-nominate him or her next year!

After an opening reception organized by the super capable Karen Adams and a small staff of MC volunteers (Steve, Wes, Eric L., Camille to name a few), Media Center Chairman of the Board Barbara Noparstak kicked off the festivities. By show of hands, we learned that most of the seventy or so guests were visiting the Media Center for the first time. Barbara shared with the guests the wonderful opportunities for community involvement we afford here. Then Barbara turned the mic over to Louise Pencavel, Media Center staff producer and producer of the Local Heroes series. One of our “heroes”, Louise described what it means to be a local hero and the room was very hushed. Then the screening began.

One by one a short film highlighting the contribution of each honoree was shown followed by the conferring of the individual award. Each “local hero” spoke briefly upon receiving his or her award. As one might expected, each hero was quick to deflect praise and instead cite the work of others that inspired them. Away at college, McKay was not able to attend but was represented by his mother and his brother. His mother who read a lovely tribute on his behalf. After the screening, there was some paparazzi time and more socializing.

We honored six people with our award, but it was indeed we who were honored to have in our studios six such exemplary local heroes who are changing our world.

This years recipients were:

CURTIS HAGGINS, Dean of Students at Midpeninsula High, is often the first face a student and a parent see when there is a disciplinary problem at Midpeninsula High. And his is a kind face. He is full of love for those kids. When kids feel that love and caring in their lives, real change becomes possible. In addition to working with many troubled kids, Curtis is a role model and mentor to the larger school population. Immensely popular, yet humble and self-effacing, Curtis lives his values every day of his life among the kids he truly cares about.

LEIF ERICKSON, Executive Director of Youth Community Service, puts kids from different backgrounds together and puts them on service projects like cleaning up the baylands. He believes that giving disparate kids a common goal will unite them in a lasting way. Kids, like adults, often fear and label other people, people that they don’t understand. Leif has found that bringing young people together in service erases artificial borders between them and creates opportunities for understanding, friendship and real dialog of the issues and concerns that all kids have.

CAROL SAAL, responsible for fund-raising for the new Jewish Community Center, spearheaded a campaign to acquire the old Sun Microsystems campus for close to $28 million at a time when not only did the JCC have no money at all, but was for all intents and purposes not operative. Looking for direction, the organization found a super dynamo in the person of fund-raiser and visionary Carol Saal. The new JCC is now open and crowded with people from all walks of faith enjoying a variety of social, athletic, spiritual and artistic activities.

McKAY DAINES, former Gunn High student. created a support network for survivors of teen suicides. McKay started a Facebook group to address the fear, loneliness and sadness affecting our teen community caused by the recent teen suicides and to particularly assist those who had either contemplated or attempted suicides. Thousands of students have joined and have found support, friendship, hope and connection. McKay himself operates a hotline for trouble youths who just need to talk. McKay believes that though some teen suicides are the result of mental illness, others may be the work of a moment, a snap decision in an instant of misery. He has put himself in the front lines of the fight against teen suicide.

BOB HOOVER, long-time youth mentor in East Palo Alto is currently coordinator for Parole Re-Entry Program at Free at Last. Bob Hoover’s life is an inspiration. Brought up in Jim Crow south, he never let the justifiable anger and hurt he experienced, deter him from creating the life he envisioned for himself. Mentored by others at crucial times, Bob determined he’d be a beacon to others. As a result, he has given his life to service of others. His most recent and perhaps in some ways most ambitious vision has been to train parolees adjust to life on the outside and thereby reduce their rate of recidivism. Parolees often lack basic skills like filling out a job application, obtaining credit, getting a bank account. Through his teaching, supporting and mentoring, Bob gives parolees the training and the emotional support they need to stay out of jail and to fulfill the renewed promise of their lives.

GARY RIEKES is creator and director of the Riekes Center in Menlo Park. The Reikes Center is devoted to helping kids reach their full personal potential through physical exercise, physical training and artistic expression. Gary wants to encourage kids in their dreams, even what might considered the “unrealistic” ones like maybe being an NBA player or a rock star . He believes in teaching kids to “break down” their dreams into realistic obtainable goals. If you have a certain dream, then what are the skills needed to make it. Gary is going to give you every opportunity to meet those goals and to compare yourself to the most important standards – the ones you set for yourself.

We are replaying not only the highlight segments but the longer form interviews on Channels 27 and 30 throughout the month of March. Please check our schedules for playback times.