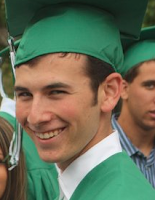 I had the distinct pleasure of being at the Palo Alto High School Graduation ceremony today. I went there to support Wes Rapaport.  Wes —  as anyone who has given the Media Center more than a passing glance over the past six years knows — has given a great deal of his time in service to the Media Center.  Well it turns out, no surprise to us, that he has given a great deal of himself whereever he has gone.  And whereever he has gone he has left an indelible and positive mark.  Everybody loves this guy.

So before his 400 classmates and the two thousand family and friends of the school community, Palo Alto High School conferred upon Wes the 2011 Viking Award.  Now this award is NOT given out every year.  It is at the discretion of the faculty and more often than not it is not given out.  On average, it is awarded every ten years!  The Award was presented by Wes’s journalism teacher Mike McNulty, who read a veritable litany of four years of Wes’ contributions to Paly staff, administration, students and the greater community.  Mr. McNulty reported that the faculty and staff easily came to consensus about honoring Wes with the Viking Award, that the decision was”virtually unanimous”.

We at the Media Center are extremely proud of Wes and congratulate him on being so recognized by his high school community… and if you are interested in learning about the award that Wes won last week, read on….

So last Friday, Wes was honored by the Palo Alto PTA Council at its annual Honorary Service Awards Luncheon.  These awards go to anyone in the community whose pursuit of service to the community has an enormous impact not only on the school community but on the community as a whole.  It is their highest accolade and the vetting for this award must be approved at the highest levels in the district.  So Wes was lured to the luncheon thinking he was honoring Mr. McNulty, his mentor at Paly, but the tables were turned when it was he, Wes, who received this top honor from the PTA Council.

Well Wes, I think you can just stop now and relax and enjoy your summer.  You have a few months until it’s time to transform your college campus.   We are sure going to miss you around here… but something tells us you’ll be back.  No one could give as much as you have to your town and not return to brighten its streets and avenues again!