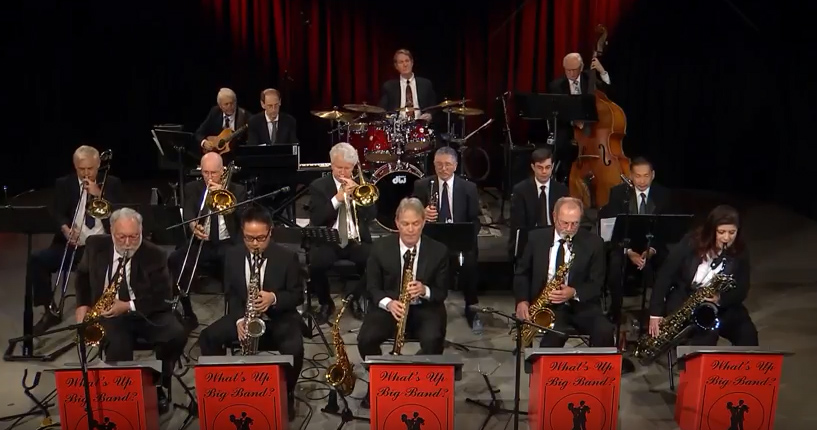 What? What’s Up? What’s Up Big Band! The Hayward-based 20-member dance band taped a set in our studio on March 3. It’s their third time taping with us. Long-time Midpen denizen and part-time staffer Stan Ng volunteered his video editing and audio remixing skills over the last two months to put together a sparkling show, which you can see below. The band recorded a dozen songs, including “Route 66,” “Take the A Train,” and “Paper Moon.”

“It was great to have four cameras,” says Stan, “because it meant that we could have one ‘safe shot’ and still have three cameras looking for interesting shots. With a big band there are many possible angles.” We used our jib camera for an elevated view of the band, which “gave us a really good view of all the band members, even though they weren’t on risers,” says Stan. We recorded all four cameras separately, and Stan picked the best shots later.

We also recorded 14 separate audio tracks in addition to a reference mix. Audio pro Phil Fox volunteered to set up microphones, running cables, and adjusting all the audio equipment for the show. Band leader Mike Dee joined forces with Stan on a remix. “It was great to be able to work together in Midpen’s new audio editing suite,” says Stan. “We could hear what the mix really sounded like, and with both of us there, we came to agreement on a mix without a lot of back-and-forth emails.”

Volunteers Asia Dubarenka, Judy Rock, Audrey Daniel, and Farrar Pace worked in the studio on the day we recorded. Andrew Chen was the tech, and Nina Perry, usually the host for Peninsula Backstage, our occasional show about local live theater, introduced the band and the songs.

What’s Up Big Band has kept audiences dancing, toe tapping, and enjoying live music with the hit tunes of the 1930s and 40s since its founding in 1994, playing the music of Louis Armstrong, Count Basie, Cab Calloway, the Dorsey Brothers, Duke Ellington, Benny Goodman, Harry James, Stan Kenton, and Glenn Miller, among others. They rehearse every Thursday night at the Hayward Odd Fellows Sycamore – Lodge #129.