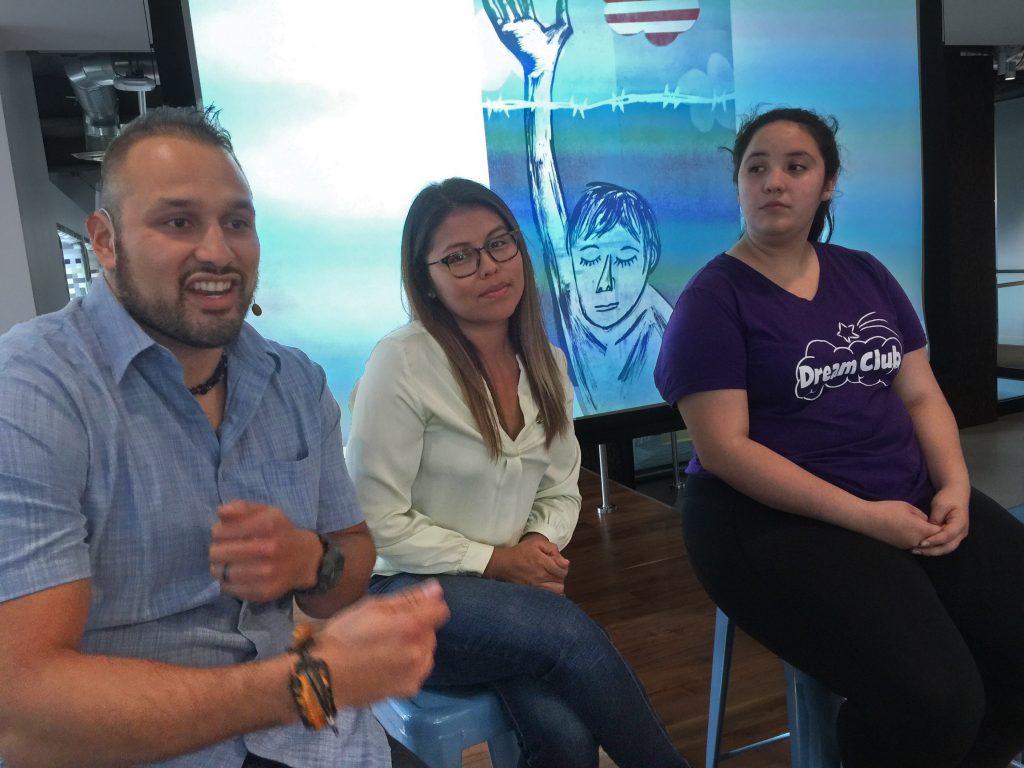 “You never know where a story will lead.” says Elliot Margolies of the Midpen Media Center. In late June, Margolies teamed up with renowned Mexican American author Francisco Jimenez and six DREAMers to create an evening of stories at the Mitchell Park Community Center. DREAMers are those who came across the border as children with no papers and who have since grown up in the US and hope for a pathway to citizenship.

Professor Jimenez was in that same category when he came with his family in the 1950’s to work in the fields. The storytelling event was part of a Community Stories grant awarded to the Media Center by California Humanities. Sitting in the audience at the Palo Alto event, was Berenice Lai and her children. Berenice is an Events Coordinator at SurveyMonkey, headquartered in downtown Palo Alto. Like many in the audience she was very moved by the stories and dabbing away tears. Through her efforts, three of the six original storytellers, Professor Jimenez, and Elliot made a presentation to SurveyMonkey employees on September 20. The group was introduced by the corporation’s Chief Financial Officer, Tim Maly, and the performance was seen in Palo Alto and transmitted via video to all SurveyMonkey locations worldwide.

“SurveyMonkey made our group feel like royalty – showering us with snacks and gifts, ” reported Margolies, and then they gave the Media Center an unexpected contribution amount that will enable Professor Jimenez and Margolies to work with a new group of DREAMers for an event that will take place at the Redwood City Downtown Library in February!

The Midpen Media Center develops storytelling projects because they are powerful tools for building relationships and solving problems. When DREAMers dare to tell their stories, others can understand and engage in meaningful conversations around immigration, immigration law and reform – factoring “people-stories” into the mix with policy implications. In related news, Francisco Jimenez is the 2016 awardee of the John Steinbeck Award. The Steinbeck Award is sponsored by the Martha Heasley Cox Center for Steinbeck Studies at San Jose State University and has been given to Bruce Springsteen, Sean Penn, Joan Baez and other luminary artists and activists. The award ceremony is September 28.