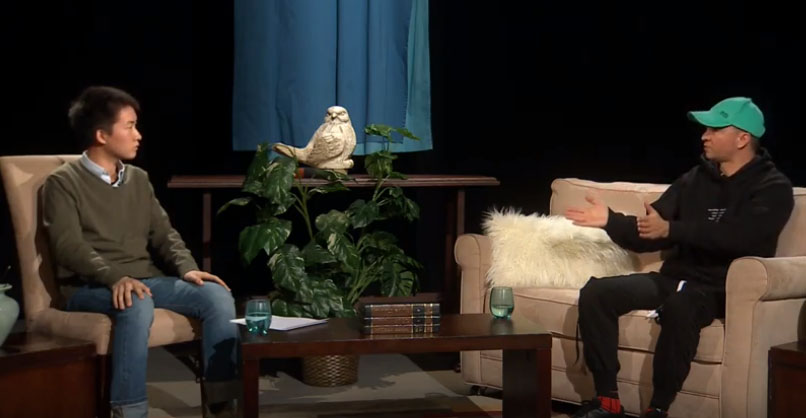 Midpen Media’s Studio Production Basics workshop teaches community members how to use the studio and its equipment. Students also learn how to perform studio crew roles like director, cameraperson and audio tech. Putting their new skills to the test, workshop participants create their own half-hour TV show that will air on Midpen Media’s cable channels and YouTube. The February class decided to base their show on classmate and Midpen Media youth intern Brian Lee’s idea.

Brian’s idea was to highlight tech industry movers and shakers and their thoughts on news and events coming out of Silicon Valley. “After moving to Palo Alto recently, I was very surprised by the fact that there wasn’t a serious technology show here. After all, it’s Silicon Valley! It was after discovering Midpen Media, and the amazing facilities and people here that I realized I could help create this show. I shared my idea with my classmates, and they liked it. So we just went with it!” says Brian.

Brian hosted and produced the new show “The Tech Talk Lounge,” and even worked on the set design and graphics. “The biggest challenge we had was designing an intro for the show,” he added. “We were able to create this very basic but hilarious intro with the help of Emily Parent, who works at Midpen Media and is a very talented singer.” Emily’s show intro is comprised of a playful song and a simple black background with white credits.

The first episode — Brian is planning on filming more — was a conversation with Andrew Federici, a long time marketing director in the entertainment and technology fields. Andrew is currently the head of marketing at Day Two, a science-based company with a personalized nutrition app to monitor and control blood sugar levels. During the interview, Brian asked Andrew about his career trajectory and some detailed questions around the hot button issue in Silicon Valley — data privacy.

If you have a show idea or are interested in creating TV, join us for The Studio Experience and check out our Studio Production Basics workshop.