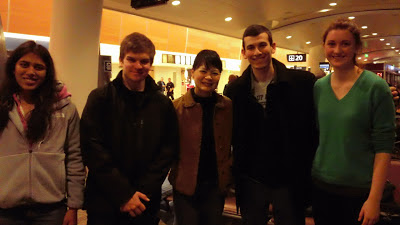 The Media Center’s Youth Video Corps (YVC) is in Washington DC for the Inauguration. The five students, Nitya Kasturi and Dakota Baker from Gunn High School, Alec Furrier and Kenny Jones from Palo Alto High School, and Caroline Clark of Woodside Priory, worked alongside former Palo Alto Mayor Yiaway Yeh to create videos with the City of Palo Alto to inform the community about important issues. The Democratic Municipal Officials took interest in the YVC and invited the students to travel to document various parts of the Inauguration. Congresswoman Anna Eshoo graciously provided tickets to the Inauguration ceremony, and Southwest Airlines generously donated airline tickets. The Media Center’s Becky Sanders and intern Wes Rapaport are in Washington with the students to facilitate production. Over the next several days, the YVC students will share their stories through regular blogging.

Alec Furrier: “2nd Semester. January 18th. 2013…. So far, the trip has been great. Southwest gave us free tickets and the flight was nice and comfortable. Washington DC is an amazing city, with cool, old-fashioned buildings. Here in DC, I find that people talk about politics WAY more than back at home. It’s probably just because of the upcoming inauguration, but I enjoyed the discussions. They were very entertaining. When we got to our generous host’s and hostess’ house, we spent the night researching and brainstorming questions for our potential interviewees. Overall, today has been a pump up day that has made me excited for the rest of the trip. Day One: ✔”

Dakota Baker: “Even though travelling East made the day three hours shorter, today has been a very long one. Great, but long. It started a little early for my taste, but my nervous anticipation for the activities to come made getting out of bed an easier task than usual. With only about three hours of sleep last night and eleven or so hours total travel time today, I know I’ll still have a hard time falling asleep. We didn’t have a chance to see much more of D.C. than glimpses through the windows of our Supershuttle as it was getting dark; we still have everything ahead of us. Our hosts are fantastic people, beyond hospitable. They even served us homemade spiced brownies! Mmm-mm. . . Former Palo Alto Mayor Yeh provided us with tons delicious sustenance from the wonder of Costco Wholesale. If these people aren’t too careful, I may never leave!”

Nitya Kasturi: “After a long day of traveling, the group came together to share our experiences from the first day. Our day started at 4 AM, and even though I felt extremely lethargic, the thought of the inauguration kept me running. We reached the airport at around 6 AM. A trip to the airport is incomplete without a completely ridiculous airport purchase: a cup of fruit for $6. Our first flight took off at 7 AM. The flights were free courtesy of Southwest Airlines. THANKS! The flight was great for catching up on sleep, and listening to the stories of the passengers next to us. Some passengers were attending black tie galas, while others were returning home to continue their work for President Obama. As soon as we landed in DC, we took a super shuttle with foreigners from London, here for the Inauguration as well. Seems like the second term of President Obama not only affects the US, but affects people around the world. As soon as we went into our house, the hosts warmly invited us, and offered us an amazing meal from Costco, including the spice brownies. The spice from these brownies can really kick you when you least expect it. We concluded our day with a little research on the local congressmen and mayors we will be interviewing tomorrow. I can’t wait for an interesting day filled with interviews.”

Kenny Jones: “I don’t usually wake up at 4:30, but when I do, I make sure that it’s for an awesome trip to Washington DC. Although every fiber in my body was resisting the VERY early morning wake-up call, I managed to drag myself out of bed and arrive at the Southwest terminal for our 7 o’clock flight. The flight was great, and I managed to scarf down some food, but the water bottles, at $3.50 each, can only be described as highway robbery. At the end of 6 hours of total flight time, two twenty minute naps, and one failed crosswords puzzle, I finally set foot in DC. We haven’t had much time to absorb the city yet, but my first impressions have been nothing but positive. We encountered some very personable foreigners, met our excellent hosts, and have settled down in preparation for a big day tomorrow working at the NAB (National Association of Broadcasters). Can’t Wait!”

Caroline Clark: “Traveling to DC for the Presidential Inauguration is one of the few circumstances in which waking up at 4am is acceptable. After a tiring day of flying and long time in DC traffic, we finally situated in the comfy (and warm!) hosts’ house. We all sat down to dinner together, discussing the friendly rivalry of our neighborhood schools back home. We soon got to working, preparing for the following day which will be filled with action. We sat brainstorming B-roll areas, researching DMO members, and discussing potential interview questions over milk and brownies. Despite having to wake up at an ungodly hour, today has been a lot of fun. Our group worked surprisingly well together, and I am looking forward to a promising trip in DC!”