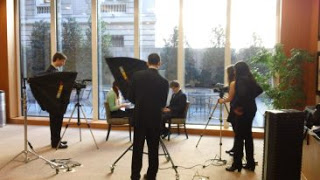 Day 2 of the Media Center’s Youth Video Corps (YVC) Inauguration trip was a long, but rewarding one. The students worked hard all morning and afternoon to interview elected officials from across the country for the Democratic Municipal Officials. Posing with an inflatable Southwest Airlines plane brought welcome levity to the elected officials. After taping interviews in the National Association of Broadcasters studio, the group, with former Palo Alto Mayor Yiaway Yeh, and the Media Center’s Becky Sanders and intern Wes Rapaport walked along the National Mall and gathered footage while taking in the historic monuments and buildings. The YVCers blogged about their Day 2 experiences.

Alec Furrier:
“I’m sitting here with sore feet, because we did so much walking. Since I am from Palo Alto, I am not accustomed to the metro and walking mentality of DC. The morning started out slow, as we set up our cameras and equipment. After a great burger at ShakeShack, we started the interviews. The content was great, and I enjoyed hearing the elected officials’ opinions on issues. Also, they all worked hard to get to their elected positions. They ran for office multiple times despite setbacks and challenges. They wouldn’t let adversity get in the way of them helping the public.The DMO is the program they all worked with, and it is a great way for municipal officials to stay connected. It provides them with tools to become better public officials. After all the interviews, we went to visit the monuments. This was easily the best part of the day. Being in the nation’s capital really brought out my nationalism and American pride. We saw numerous statues and buildings, and then went back to the house to play a game of Trivial Pursuit. Unfortunately, the girls won. But still the day was pretty darn awesome.
Day 2: ☺”

Dakota Baker:
“The alarm clock went off at 6:45, was shut off immediately, and the rest of the ladies and I went right back to sleep for another two hours.  We started our day taking the Metro to the National Association of Broadcasters.  We arrived there and started setting up our interview set a little after 10 am.  In addition to providing us with recording space and lighting equipment, the NAB had an entire table of snacks and beverages set out for us and our interviewees!
It wasn’t clear until the last minute who all our guests were going to be or how many were going to show up.  A few canceled and a
couple others tagged along with a friend or colleague.  I finally got the name of the woman I was to interview, Gale Jones Carson, a DNC representative from Tennessee, about 15 minutes before she arrived.  We had done background research last night on all the interviewees we had confirmation from at that point, so with Caroline’s help I did some lightning research and prepared questions as fast as I could.  We had three people come in today, with several more coming tomorrow.
We finished up at 3 pm and spent the rest of the afternoon and evening walking around the city and collecting B-roll at the National Mall.  By the time we reached the Lincoln Memorial, my new boots were really taking a toll on my feet–and we still had a ways to go to get back to our lodgings.
Kicking those off and slipping into my Uggs was such a relief!  Kenny, Alec, and Becky picked up dinner for us from a yummy pizza place nearby and we played a heated boys v. girls game of Trivial Pursuit.
I was a little nervous when we first set out this morning, having no idea what to expect, and I ended up having a ridiculous amount of fun today. Looking forward to another great day!  Better get to bed so I can get started on tomorrow ASAP.”

Caroline Clark:
“Today has been hectic, fun, productive, tiring and highly successful. After arriving at the NAB studio, we had some extra time to prep before the interviews started. I had prepared to interview an official whose name was mistaken, meaning that the research I did last night was irrelevant. This turned out to be fine, because we corrected the name and had time to prepare a new set of questions more appropriate for the new interviewee.
He couldn’t make it.
There were a lot of “trouper” comments.
After receiving the name of a third interviewee, I did my research and came up with more questions. He’s confirmed to come tomorrow…..success!
Despite having to roll with the punches, today was an amazing experience. I loved the flexibility of the environment and
everyone’s collaboration. I was pleasantly surprised with how well everyone worked together. Three other YVC members conducted successful interviews, and I was able to practice reading questions and handling equipment.  We finished up just in time, and walked along the National Mall for several hours. Today’s been incredible. We’ve gotten work done and had fun. After returning home and having dinner, we played a loud game of Trivial Pursuit full of poker faces and strategically placed giggles.
I can only hope tomorrow is as amazing as today was.
DC has been an awesome adventure so far!”

Kenny Jones:
“I am finally getting a chance to relax after a very fulfilling, very awesome, and extremely exhausting day. It started early; we had to hustle over to the NAB studios in order to set up our equipment so that we would be ready for our interviews. We ended up interviewing three really cool and unique local government officials for our video: Myron Lowery, Gale Jones Carson, and Karen Davis. Afterwards we had a chance to sightsee a little bit under the pretext of “finding b-roll”. We first visited the William Tecumseh Sherman Memorial, then the White House,
the World War II memorial, and rounded it out with the Lincoln and Washington memorials. Having never visited DC before, the experience was truly indescribable — and I still can’t over the size of the Washington Monument! It’s really tall! We rounded out the day with some pizza and an intense game of Trivial Pursuit. Although by this point I am somewhat sleep deprived compared to my usual 9 peaceful hours of shut-eye, I look forward to what the next days’ adventures brings.”

Nitya Kasturi:
“The day began with a wake-up call from the lovely Becky Sanders. My body physically could not get up for a couple of minutes, and Caroline and Dakota finally got me up. After we discovered that we woke up an hour and a half too late, we quickly rushed into our business attire and ate a delicious banana chocolate muffin with orange juice. Carrying the tripod and my HUGE purse, we sprinted out of the house. Our Obama Metrocards definitely enhanced the experience of riding in the Metro. I was surprised at how well the public keeps all of the stations clean! We arrived at the National Association of Broadcasters studio at around 10:30 AM. We set-up our equipment, and I began preparing for my interview with Councilmember Lowery from Memphis, Tennessee. Yiaway soon shocked us with the news that two more interviewees would be arriving, so the rest of the YVC took out their iPhones and began research on these mysterious members of DMO. Half of the group made a quick stop at Shake Shack for lunch and I had a veggie burger, known as a “Shroom Burger.” The name kept me cracking out loud all throughout lunch. As soon as I finished my lunch, we went through one interview, and I handled one camera. Soon after, Councilmember Lowery entered the room and we began the interview. He brought an aura of energy into the room, and even though it was my first time interviewing, I felt comfortable. I didn’t exactly show it, as my hands were shaking. After I finished the interview, I had a huge sigh of relief, but inside, I still wanted to interview Councilmember Lowery, but we had to rush out of the studios by 3 PM, so we locked up all the equipment.
We went around the city for some sightseeing and B-roll. We stopped by the White House, the World War II memorial, and the Lincoln memorial. Our group had an interesting conversation while walking down the National Mall about the presidents that have been assassinated. After all the sightseeing, my feet were aching so bad, that my feet were still tingling several hours later. The cold weather finally got to me, so I took out some hand warmers to stuff into my gloves. On our way back to the house, we stopped at CVS to buy some last minute essentials, and ordered some delicious pizza from Bacio Pizzeria. We walked into the house, and immediately started playing Trivial Pursuit. We split by gender, and by the immediate knowledge that Kenny and Alec had under their sleeves, I was sure that the guys would win. Surprisingly, we won due to Becky’s knowledge. She claims it’s her age. I have to say, this DC experience would be incomplete without the members of the YVC, Becky, Yiaway, and Wes. The reason this trip has been amazing so far is because every person brings something to the table, may it be their humor, knowledge, or sarcasm. Wes says this blog post is getting way too long, so I’ll have to cut it here. I can’t wait for the rest of the interviews tomorrow.”

In addition to regular blogging, updates from the YVC can be found on the Media Center’s Facebook page: www.facebook.com/MidpenMediaCenter and Twitter feed: http://twitter.com/midpenmedia