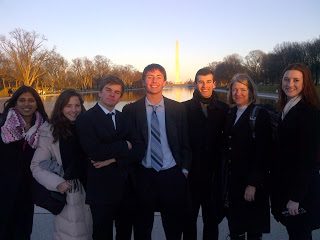 Today the YVC hit its stride in its second day of interviews at NAB where the team interviewed seven electeds.  We were joined for lunch by Kim Delevett of Southwest, our sponsor airline.  We quickly relocated to the offices of Ch2mHill, the event host for the DMO reception.  There the YVC interviewed close to a dozen electeds, pretty much on their own, with minimal assistance from Wes.   We’re back at our host home, getting it ready for a crack of dawn excursion to the Hill for the 57th presidential Inauguration.

Alec Furrier:
“Today was filled with a vast amount of interviews. It was great meeting the local officials that make our democratic system possible. The highlight of the day had to be the phone call meeting with our Congresswoman Anna Eshoo. She even said that we were an inspiration for her. Just that fact alone could make my day, but we didn’t stop there. Next we hustled over to the DMO Reception. This reception was filled with fantastic elected officials. Every person there had their own amazing story and it was exciting to interact with them. An example was Edward Zipprich, who did lots of work with the Democracy for America and was a prominent figure in New Jersey. It was a busy, but great day.

In other news, the Patriots lost today. Next year… Next year.
At least Obama is getting sworn in tomorrow, and that’s what’s really important.
Day 3: ★”

Dakota Baker:
“Today we started off the same as yesterday.  We got up and headed over to the National Association of Broadcasters around 10 am.  At 10:30 we had a phone call interview with our U.S. House Representative from California’s 18th Congressional District, Anna Eshoo.  This was a fantastic conversation.  She gave us extremely clear, focused, informative answers.  She spoke warmly and conversationally, making it easy to relax, even while being aware of what an influential person we were engaging with.  She answered our questions for nearly a half hour.
Between 11 and 3 we interviewed five other municipal officers from a variety of cities around the country—significantly more productive, exciting, and exhausting than yesterday.  At the end of each interview, we took a few photos with the elected official.  In several of these photos we posed with a Southwest Airlines inflatable toy plane to thank them for their generosity for flying us out here.  One woman we interviewed, Mildred Crump, a city councilwoman from Newark, NJ, said she knew a former Southwest pilot who she played bridge with and asked if she could take the toy with her so she could tease him with it!  We had several spares and were, of course, happy to give it to her.
We re-energized with lunch from the delicious burger joint Shake Shack, for the second day in a row.  At 3:30 we took the Metro (which looks really awesome and kind of reminds me of the set of the Chamber of Secrets, the home of the Basilisk, in the second Harry Potter) to the location of the Democratic Municipal Officials’ Inaugural Reception.  We set up a few pieces of equipment in a side room there and shot short interviews of DMO members who came to us.  We met a huge number of intelligent, dedicated, influential people who were all putting their hearts into improving their communities.  Everyone who spoke with us stressed the importance of political participation and youth involvement, so they were very excited and encouraging about our work.
When the reception concluded, we took the Metro back “home” and the girls and I ate Thai food across the street (literally), while the guys stayed in and watched the Patriots v. Ravens game.
Tomorrow is Inauguration Day and the weather forecast says high: 27, low: 18 with a chance of snow—the first really cold, lousy weather we’ve had, on the one day we are spending 90% of our time outside! Isn’t that lovely!  But I’ve got long underwear, a giant down coat, and hundreds of thousands of people in the crowd to keep me warm!”

Nitya Kasturi:
“Another late night got me a little cranky in the morning. We didn’t have enough time to eat breakfast, so I grabbed a muffin and ran out. The format of the day was practically the same, but we started with a phone interview with our district Congresswoman, Anna Eshoo. It’s because of her generosity and appreciation for us youth that we received the tickets to the Inauguration tomorrow! We got the equipment out of the closet that we’d stored the day before at the National Association of Broadcasters and set up. Our first interviewee was so early that she got some special time alone with Katie Couric on the projector in the conference room next door. Several interviewees came in and out, but I practically blanked out due to my lack of sleep, but still made sure to check the audio on the camera I was monitoring. After a quick lunch at Shake Shack (again!), we were informed of a last minute interview of Kevin Brown, so I rapidly got onto my iPhone for some research, and came up with a couple of questions to ask him.
After the interview, we said good-bye to Robert and the security guard that has been watching over the NAB studio. We took some pictures and to ok the Metro to the DMO reception. All of the people we had interviewed were there, and even more. I quickly caught up with Mr. Brown, Councilmember Lowery, and his wife. These people definitely got a couple of laughs out of me. We set up the cameras and went around for B-roll and some more interviews about the DMO. I had a small awkward encounter with some other DMO members, who towards the end offered me an orange ticket to the inauguration tomorrow, but I kindly refused. We went back to the house and stopped at Beau Thai for some delicious Thai food, but extremely spicy. I drank about 3 glasses of water. Tomorrow’s the big day!!! I hope we will be able to catch a glimpse of Obama, Kelly Clarkson, and my birthday twin, Beyonce. Yes, we are twins. We’re only 16 years apart.”

Kenny Jones:
“With an added extra poofy comforter I slept like a rock! Today was more of the same: early wake-ups and hectic waking hours. But by now I have adapted to the sleepless lifestyle, and we had another very fulfilling day. Our schedule was a lot busier; we ended up interviewing over 10 municipal officials, including our House Rep Anna Eshoo, which was an awesome experience. We have taken so much footage over the past few days that at this point I’m pretty sure we could make a 3-hour documentary on the DMO. The “electeds” we talked to came from many different cities and areas all across the US, but the overarching theme of the day was their passion and commitment to public service. They also reminded us — almost continuously — that the Inauguration tomorrow was going to be cold. Really cold. Really really cold. So now I am very prepared to be very very cold tomorrow. But my excitement will not in any way be diminished for the upcoming ceremonies. We were originally planning to leave the house at the ungodly hour of 5:30 am, but cooler heads have prevailed, and our plan at the moment is to leave at 7. Also, tangentially, the Patriots have finally been knocked out of the playoffs. Which is pretty awesome. But not as awesome as our President’s swearing-in ceremony tomorrow should be. It’s kind of a big deal.”

Caroline Clark:
“Today has been a very productive day. There was more freedom and independence with interviews. After getting a late start in the morning and having our production meeting at the Metro station, we arrived at the NAB with just enough time to set up before our first interview. This was a phone interview with Congresswoman Anna Eshoo, which ran for almost a half hour. Being able to speak to a member of Congress was amazing. She was very warm and easy-going, and her enthusiasm towards youth involvement in politics was clear. Her interview went smoothly and was recorded well.
After finishing this we began to prepare for the next set of officials we were to interview. These also went well….it’s almost as if we’re getting the hang of it!
Next we packed up our stuff and headed over to the DMO reception. There we conducted a series of short interviews, with each of the YVC members trading off interviewer, camera, and light holding jobs. We were self-directed, and it was incredible to learn that we’re capable of successful efficient work. Around 6:00 we packed up our supplies and headed out. It’s been a phenomenal day. We’ve talked to a member of congress, interviewed many municipal officials, and become much more comfortable with the interviewing process.
All in all, today’s been incredible. I am completely psyched for the Inauguration tomorrow! Let’s hope we survive the cold!”

In addition to regular blogging, updates from the YVC can be found on the Media Center’s Facebook page: www.facebook.com/MidpenMediaCenter and Twitter feed: http://twitter.com/midpenmedia
More information about the Media Center: www.midpenmedia.org