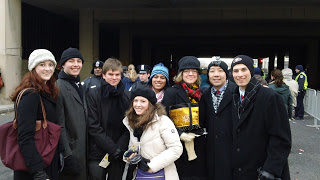 Our penultimate day in DC – began at dawn – with a walk to the Capitol where our small party soon enlarged to one million as we progressed to the Mall through two checkpoints.   After the Inauguration, gratified emotionally but physically spent we made our way to the 1300 block of Pennsylvania Avenue to the National League of Cities for an afternoon of snacking and networking with representatives of cities from all over the nation.  The view of the parade and the Capitol skyline from the fifth floor office suite and balcony were nothing less than spectacular.

Nitya Kasturi:
“I was so pumped up for the Inauguration that I had a dream about meeting Obama. I didn’t get much sleep, but I was able to wake up easily, probably because I’ve finally gotten over my jetlag. It’s kind of unfortunate that I got over my jetlag right before we depart for the Bay Area. We left the house at 7 AM sharp to walk to the Capitol Hill. It wasn’t as cold as all of us were expecting it to be. It kept a steady 35 degrees throughout the day. After separating with Yiaway and Jama, we went to our wonderful yellow ticketed area. I almost lost my Inauguration ticket twice: I dropped the ticket and also left it at the screening counter. After some discussion, we decided I was too immature to handle the responsibility of holding the tickets. We finally found the sweet spot for viewing the jumbotron screen in the yellow ticketed area, as the Capitol Dome was too far away for us to see Obama or Beyonce. The energy that was given off by being at the Inauguration was purely amazing, because if almost a million strangers were able to enjoy a single event together, the energy pulling all of us together must have been strong. All the Republicans that were announced such as Paul Ryan and Newt Gingrich were booed, and I felt a little bad for Paul Ryan. We socialized with the nearby citizens, and shared the joy of waiting together for my birthday twin, Beyonce. As soon as she came out, I was jumping up and down and screaming at the top of my lungs. Dakota and I shared a laugh when the reverend paused at the word “shower” during his speech and the sentence sounded like, “We pray that you will shower…”
The sea of people moved over to Pennsylvania Avenue and our group walked to the National League of Cities reception party in their office. The crowd at the party was originally small, but that all changed after a couple of minutes. Mayors and elected officials quickly rolled in and the party kicked off. Our group condensed into one conference room the whole time to catch a good glimpse of the parade, but as soon as the President’s car rolled in, we knew we weren’t getting any chance of seeing Obama. People immediately left their bleachers as soon as Obama passed them, but our group watched Vice President Biden and many of the marching bands from all of the states roll by. We socialized with all the elected officials, and I even played with a couple of little kids. Playing with the kids made me miss my little sister, but luckily I will see her tomorrow. After a couple of drinks (I only drank Sprite, peeps!), the party died down and we decided to head to the Official Inauguration Store. I almost bought pins for my friends, but things were just way too expensive. We took a Metro ride back home, and just had a simple dinner of pizza and sandwiches. With our trip concluding, I’m slowly realizing how much I will miss this experience. Good times always pass by fast, but I’m excited for the last unclear day ahead of us. ”

Alec Furrier:
“I thought waking up early at 7:00 was hard, but when I woke up at 5:30 today I knew, without a doubt, that I will forever be a night person. We got up, got ready, and walked to our Yellow-Ticketed area for the inauguration. We stood for seven hours in a row. Did you hear me? SEVEN hours of standing. Needless to say, my legs were dead by the end of the inauguration. Despite the leg pains, the inauguration was awesome to witness. It was great to be at a part of something that will go into the history books forever. After Beyonce’s ending with the national anthem, we walked over to the NLC. The National League of Cities. The NLC was great, and once again we met some great people who care about their community. It was also cool to see the parade. Unfortunately, Obama didn’t even roll down the window for our portion of the parade. Even though we didn’t see him walk, the parade and NLC reception were great experiences. I hope to come back and see another inauguration after being part of this one. I really like how the community comes together behind one cause, and I have never been part of something so big.

Kenny Jones:
“Wow! Today was definitely our most exciting, exhausting, and incredible day so far. It started early — if you haven’t picked up on that particular theme yet. For some reason I was the last to wake up today, but not to worry as I got ready in 15 minutes for our long march to the Capitol Building. I packed up my ‘little hotties’ (hand and foot pads designed to combat the brutal elements) but found out they should actually be called ‘little warmies’ after a so-so performance in the field. We could tell the day had a different feel to it as soon as we exited our host’s home as a Humvee and four uniformed soldiers were stationed outside the house. Even with only half as many attendees to the inauguration compared to the 2009 one — only a million — we decided to take the 30 minute walk instead of risk getting stuck in a crowded Metro station. We made it through security and found a spot in the yellow ticket area, where we were close enough to just make out some specks of movement up on the Capitol Building. Oh and by the way it was freezing! All in all we were standing for about 7 hours straight, but it was definitely worth it! It was a truly amazing environment. Watching one of the 57 peaceful transitions or continuations of power was really powerful, plus the musical performances were great. We next made our way over to the NLC headquarters where we proceeded to watch the Inaugural parade. Although Obama didn’t come out of his limo in front of our building, it was still a really cool experience seeing all the floats from every state come through. By the time the parade ended we were more than ready to head back to the house and ‘Veg out’. It’s kind unreal that we’re leaving DC tomorrow, BUT by the beard of Zeus we have been confirmed for the White House tomorrow morning which will be unreal-er. I don’t even know if that’s a word. But to paraphrase Brian Fantana: 60 percent of the time, it’s a word every time.”

Caroline Clark:
“Today was Inauguration day. A day of crowds, cold, cheering, anticipation, celebration, and patriotism. We had standing Inauguration tickets, and ended up walking/standing for a total of seven hours.
It was worth it.
Getting into the Inauguration was the hardest part due to the massive crowd and temperature. Everyone thought they were more important than everyone else, and on top of that we were in 40 degree weather with wind chill. Once we were situated, things moved more quickly. The ceremony passed by quickly, and before we knew it Obama was being sworn in. I loved his speech, particularly how central equality was to it. The performances following were incredible, I thought Beyonce’s rendition of the National Anthem was amazing.
In total the Inauguration was a success. It was amazing just to know that we were near the President. The energy throughout the crowd was inspiring, there was a sense of unification: we were all here to experience a part of history.
After this, we found our way to the National League of Cities Headquarters to watch the Inaugural Parade. It was nice to relax and sit down in a warm place while waiting for the Parade to make its way around. I met a number of people from around the country, and enjoyed watching the Parade both from the balcony and on TV.
After having stayed at the NLC reception for several hours we headed out to look at the Official 57th Presidential Inauguration Store and eventually arrived home.
Today has been phenomenal. I’ve loved being able to witness the Inauguration and meeting the folks at the NLC reception. Today’s been exhausting and unbelievably fun.”

In addition to regular blogging, updates from the YVC can be found on the Media Center’s Facebook page: www.facebook.com/MidpenMediaCenter
More information about the Media Center: www.midpenmedia.org