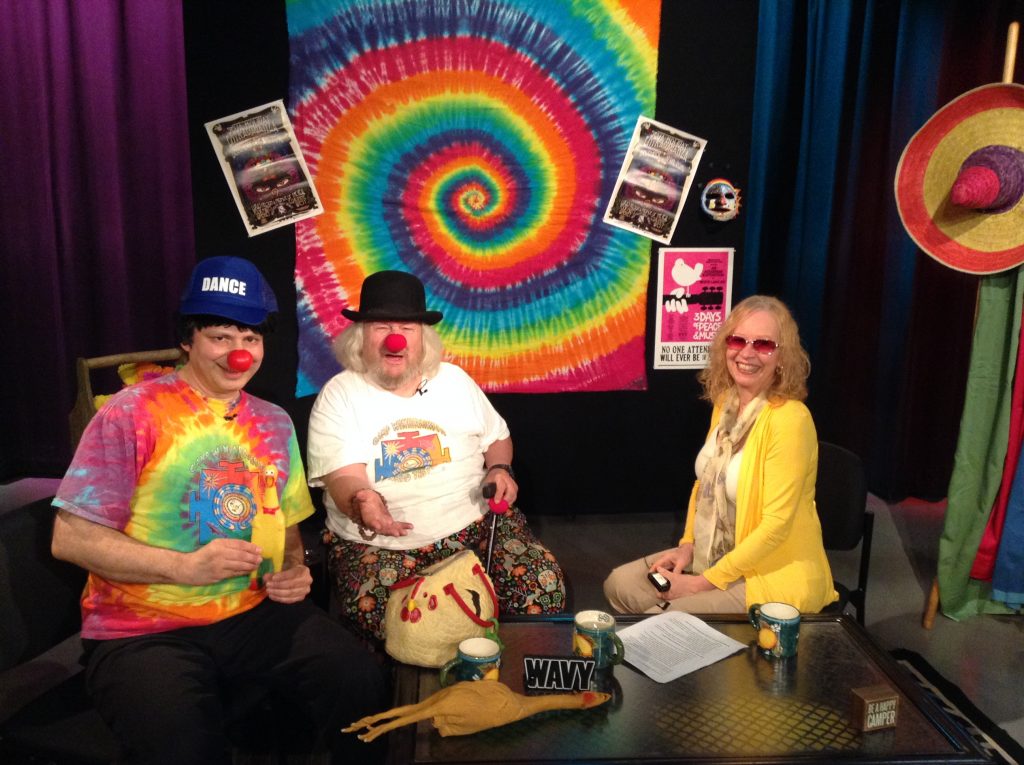 I am an actor, a performing artist, a clown, and a volunteer in Midpen’s studio.  I work multiple jobs in order to live the life I want –  to associate with creative people in creative environments.   My life’s calling is to entertain.  Making a living doing what you love is everyone’s dream.  That’s one of the reasons Wavy Gravy is an inspiration to me. For those who don’t know about Wavy Gravy, he is a hippy comedian, clown, entertainer, philanthropist, and occasional frozen dessert, who has devoted his life to role-modeling fun and how to enjoy life, by creating environments where others have fun and can realize their dreams.    Along with his wife, Jahanara Romney, he co-founded Camp Winnarainbow Adult Camp.

I have been attending Camp Winnarainbow Adult Camp since June of 2011. This June, it will be my 7th year. Some dear friends had been trying to get me to go to Camp Winnarainbow for years.  I don’t know what held me back.  Finally, I relented, and I’m very glad that I did. I felt as if I had found my tribe, as if I belonged there. Winnarainbow campers are very accepting, warm, and loving. I could wear costumes any time of day and night and “be silly.” I remember as a little kid my parents would often say “John’s being silly again.” Sometimes they would request me to stop acting so silly.  Well, at this “Camp for Adults”, I could be silly, and be a kid at heart. I thank my dear friends Mud and Trob for introducing me to Camp Winnarainbow. Mud has since passed on, but I plan to go to Camp with Trob again this year. “Mud and Trob” were married and were also known as “Marsha and David”.
The first year I went to camp, I made a new friend, “Zany Laynie”. We are now a couple of clown buddies known as “Zany Laynie and Juan Tumani”. ( I go by the clown name Juan Tumani at camp, pronounced Juan “Too Many.”) For years, I have volunteered at the Midpen Media Center on various shows, mainly doing camera work. The main shows that I have worked on throughout the years have been” Speaking of Menlo Park”, produced by Louise Pencavel, ”Spirit Talk”, produced by Jean Ramacciotti from before Youtube, and Talking with Henrietta, produced by Henrietta Boroughs.  Jarred Hodgdon, also known as “Velcro Fathoms” had me be the emcee on one of his fabulous Halloween shows a few years back.  I have helped crew on other shows as well. I really enjoy working on these shows. Sometimes, I have gotten so engrossed in listening to the topic being discussed on the show, that I didn’t hear my cue right away. I have also been known to dance while doing camera work when the music moves me.  I have learned so much about different topics throughout the years at the Midpen Media Center.

I have been a regular volunteer on Darlene Carman Presents for a couple of years now, mainly doing camera work. I have helped out doing teleprompter as well. Once, Darlene had me be a food taster on the show titled Michi’s Asian Cuisine in November of 2016.  Being on camera is a lot of fun, too.  A couple of years ago Darlene had a guest on her show that lives in Berkeley, and teaches Yoga.   A light bulb flashed for me, and I thought: “Maybe I could get Wavy Gravy to be on Darlene Presents”.  Wavy Gravy lives in Berkeley as well. On the Set of Darlene Carman Presents

I spoke to Darlene and her husband Doug about Wavy Gravy, and maybe trying to get her to interview him on her show.  She was very enthusiastic and gave me the green light.  But it took a couple of years to arrange. I procrastinated in contacting Wavy Gravy for a long time.   After all, he gets requests for appearances all the time.  Why would he say “yes” to me?    Finally, I sent Wavy Gravy an email. I didn’t get a response. I went to an event in Berkeley that was a benefit concert for the Seva Foundation this past December.  Wavy Gravy sits on their Board of Directors.   At this concert I spoke to Wavy Gravy’s wife Jahanara.   I mentioned to her that I have a dear friend who would love to interview Wavy Gravy. She mentioned to me: “We are very accessible. Wavy has a phone in his bedroom. The phone number is listed.”

I tried looking up the phone number, but was not able to find him listed.  I kept trying to send some emails, to no avail.  Finally, I called the Camp Winnarainbow office, and was able to get Wavy Gravy’s personal phone number after sharing my story with the receptionist.  I gave the phone number to Darlene, who called and spoke to Wavy Gravy.   Wavy Gravy told Darlene that he and his wife would be traveling to Maui in March to do a benefit concert, but when they returned, he could do the show.   Finally, I realized my vision!  Wavy Gravy actually said that he would love to do the show and “talk to those people”.

After we agreed on a date, I received a message on my voicemail from Wavy Gravy stating: “You mean this is a TV show? I have to go all the way to Palo Alto? I stopped driving when I turned 80 last year. I thought this was radio, and I was going to call in.”   I called him, and he told me that he was still on board to do the show, but he would need to get a ride to the show. He told me that the driver would have to be “Mrs. Gravy” approved.  I racked my brain for a couple of minutes and I thought of Moon Puppy, who is a regular attendee of Camp Winnarainbow, and happens to live in Berkeley. I called him and left a voice message. He called me back almost immediately and said: “I would be honored to drive Wavy Gravy to Palo Alto”.  Everything was in place for Wavy Gravy to be interviewed on Darlene Carman’s show on April 5th, 2017 and Darlene wanted me to be on stage, to sit beside Wavy Gravy as a guest!

But that morning of April 5th, I woke up quite nervous to share the stage with Wavy Gravy that night. I even mentioned to my dad that maybe I should tell Darlene that I did not want to be on the show, but to let her interview Wavy Gravy alone.  I knew I shouldn’t feel nervous.  Then I was browsing Facebook and I noticed that April 5th just happened to be Moon Puppy’s birthday. I didn’t wish Moon Puppy Happy Birthday on his wall on Facebook as I would normally do for my friends, but I thought: “I’ll surprise him with a cake”.  And by noon, I felt okay. I thought: “Camp Winnarainbow is about Fun. I should concentrate on that, and everything will turn out okay”. I went to Safeway in Mountain View and bought a Tres Leches cake. Of course, the cake decorator had just left for the day. I decided to decorate the cake myself. I also decided to buy some Lay’s Wavy chips. They were on sale. I bought one of each of the four varieties.  I took the cake and the potato chips to the Midpen Media Center. I left the cake in the fridge, and I made sure to leave a note on it so no one would eat it.  Food left in the common fridge is free for all, unless there’s a note.

I went home and took a shower and tried to relax. On the way back to the Midpen Media Center, I grabbed a few colorful items out the door, just in case they could be used to decorate the set.  I arrived at Midpen. Wavy Gravy and Moon Puppy were there already, as well Darlene, Doug and crew. I sat down and ate the delicious food that Darlene and Doug bring every time they do a show. They go all-out to feed their crew!! We did the show. I think it came out well. I must admit, I actually felt quite comfortable being on the set with Wavy Gravy. I feel very fortunate that I get to hang out with him and other fellow “clowns” at Camp Winnarainbow every year. On the show, I was referred to as Juan Tumani, by the way. I invited my dad, Richard Cabrera and my cousin, Hawkeye Joe to Midpen Media as well. They sat in the studio, and watched the show live.

When Midpen staff approached Darlene to write a blog regarding Wavy Gravy being on her show, Darlene said that I should tell the story, that I deserved the credit for getting Wavy Gravy on her show, and that I should write the blog.  That’s so like Darlene, and is one of the reasons I like to volunteer on her show.  She is generous and caring.  Although I am contributing this blog, I cannot take all the credit, however. It was Darlene’s show that inspired me to try and get Wavy Gravy interviewed. I love volunteering at the Midpen Media Center. I have learned so much throughout the years being there.  I would love to thank everyone who is involved for giving me this wonderful learning experience at Midpen.  I would especially like to thank Karen Adams who has been at Midpen Media since I began volunteering there.  She has always been very helpful and supportive.  Thanks to everyone at Camp Winnarainbow as well and to Wavy Gravy who validates my own adult-need for a life filled with play, creativity and kindness.
======

John Edward Cabrera was born and raised in Palo Alto. John is a volunteer at the Midpen Media C

enter. He does mainly camera work when he crews on the shows. John is juggling three jobs at the moment. He works at a dining hall at Stanford University, at the drive-thru at the Rengstorff McDonald’s in Mountain View, and for Landmark Theatres in Palo Alto and Menlo Park.  John also does acting gigs, and has been a background extra on a few films and TV shows, as well as commercials and music videos.  John is also involved with Teatro Nahual, a Spanish language theater group based in San Jose. He was in the play titled “Leyendas y Realidades” in 2016 and in the dramatic reading of the play “El Ultimo Denario” in 2017.  When John has some free time, he loves to dance as well as sing karaoke.